Hi, I'm looking for suggestions please. I removed the complete interior from my car to do headlining and sunroof repair. I've also changed the seat bases for used ones. Everything is back in and the battery reconnected but the electrics are going mental lol. Car starts and drives. But no headlights, no indicators but random flashing of them, wipers come on of their own accord, interior lights flashing, no radio. Ariel mast up and down. It would be funny but I was looking forward to using it lol.

I do have some issues every year after storage when the battery reconnected, such as indicator flashing but this normal stops after the car has been running for a while.

To throw things into the mix, the centre console was removed including both lower dash covers so I could have disturbed something?, also used seat bases may have issues as they are connected to the electrics. I also tested the duck bill when it was stripped by pouring water on the windscreen. After lots and lots of water I had drips on the drivers side interior so could have damp electrics there?

The diversity of your symptoms could suggest the body processor module...
That unit governs much of the 'behaviour' of the car's electrics, including wiper logic.

It's hidden underneath the passenger knee bolster, it's the biggest electronics 'control box' on the car and easily recognised by its large amber-coloured multiplug.
Picture of the module with cover removed: 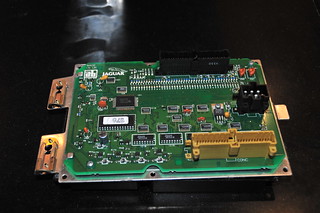 Sometime unplugging something then plugging back in can be enough to

Cheers both. I've disconnected the battery again and looked under both drivers and passengers panels. Removed and cleaned the earth cables there and in the centre console. I'll put it back together and give it another go. The issues must be there as that's where I've been disturbing things. Update when I find the cause.

Always go back to what you have done at the start, so I would disconnect the used seat bases you have fitted. I cannot see the knee bolsters causing a problem but you may have trapped a wire refitting the centre console so that would be my next job taking that back off.
Good luck anyway.
Don.
1994 Regency Red 4.0 Sovereign M117FVC Chassis 705979
1993 Volvo 940 2.0 Turbo Wentworth Estate (Daily)
Top

Cheers Don.
Tonight I've opened up the centre console, removed the radio and all connectors as well as those going to the middle fuse box. Everything looked ok. I also removed the wiring to the processor module and reconnected it. Also did the wiggle test with ignition on but no change. Symptoms are one indicator works but hazards flash sporadically with beeping and interior lights flicker with clicking noise. Door puddle lights don't work and whenbradio switched on there is a constant beep. Arial does what it wants when it wants to

would the seat base electrics cause symptoms like this?

One thing I did do when everything was stripped out Inc centre console, radio, heater and seats I had the car powered up to open and close the roof. I noticed then that the hazards were flashing at that point. Could I have damaged something? I'm busy for the next few days but will start with the seat bases and electrics as these are new to the car but are used. They and standard non electric seat bases but the new seat bases ( bum area) were from a newer 40 with electric adjustment. Any suggestions would be welcome.
1992 Jaguar xj6 3.2 litre.
2016 Audi A6 S line.
2016 Ford Fiesta zetec.
Top

Àaaaaaaaahhhhhhh. I'm at my wits end

I've removed the door panel and checked and moved wires there. I've removed both seat bases and checked an moved wires. All three fuse boxes checked moved wires, cleaned fuses yes. Centre console and radio removed and wires moved about. Sunroof area the same. Body processor disconnected and wires moved about and still the same symptoms. Think I'll take the seats back out and carpets and start again. Gutted, I was hoping to use it soon.
1992 Jaguar xj6 3.2 litre.
2016 Audi A6 S line.
2016 Ford Fiesta zetec.
Top

Try removing fuses one at a time to see if you can find the offending circuit?

Like it Larry. Can't believe I didn't think of it

I just read about someone replacing their headlining and trapping a wire for the sun visor and having similar issues so will try those next. Thanks for the suggestion 're the fuses I'll definitely do that.
1992 Jaguar xj6 3.2 litre.
2016 Audi A6 S line.
2016 Ford Fiesta zetec.
Top

Yeeeeaaaaaahhhhhh!!! Sorted it. I've checked everything. As a final idea i changed the body processor unit. Now it's great. Great to get it back on the road.