Nothing that a bit of gaffa tape couldn't fix?

katar83 wrote:Nothing that a bit of gaffa tape couldn't fix?

i have two car covers on the '40 , a new one, and one on top covered in gaffer tape to protect the new one , lol

Walker wrote:Excellent cover Pim, is it just an indoor one?

Yes, indoor use, guess that's why it fits so snugly...

It's under an XXL carport, once used to store farm equipment.
The roof is so deep that rain water does not get to the cars, even in the worst weather conditions.

as an ' insignia ' model, and as other cars like the XJS came as Insignia,


if the offered tool kit was bespoke and or different to the standard tool kit offerings ??

as i have a tool kit in XJ40 format ( and xjs facelift ) which does not fit the norm ,

and some research infers that they were supplied with the Insigna models ?

does anyone know anything about this ?

Brake buster wrote:does anyone know anything about this?

Vince, do you mean the black plastic more-square-than-rectangle-shaped version?
I seem to recall an exchange with RJ many moons ago, suggesting it was specific to certain XJS versions?
Do you have pictures you can share?

My XJ40 Insignia features the 'regular', rectangle shaped item used on all other XJ40/81 versions, I have no reason to doubt that mine was not factory original. 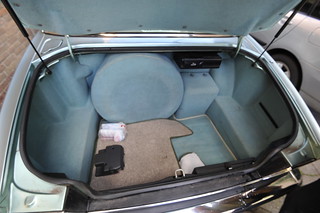 not , not the square box with moulded handle used in the XJS ,

this is the same shape box as ' normal ' for the XJ40 , but the contents are bespoke and laid out differently , RJ recalls one but cant remember the model it came with and has only ever seen the one , i also have a tool kit like this,

A design proto for another car/version perhaps?

I'll check the tool kit in my Insignia later this week, don't think I have ever even opened it...

I'll check the tool kit in my Insignia later this week, don't think I have ever even opened it...

i see where you are going, but i have two of these in my possession , and RJ knew of another , so not a one off prototype in my opinion ,

the only hint is the very last XJ40's which could include the insignia , and the last XJS also had the same style tool kit fitted, so again , possibly for the insignia versions, or maybe even the ' Majestic ' xj40's ?? no other car models were in production at the time of this early 1990's tool kit......?

one possibility has been eliminated, and that was for XJR or XJR-s , as these have ' normal ' tool kits if any at all, as they were optional extras